Is Vietnam on the cusp of a green building revolution? The Vietnam Green Building Council (VGBC) has been at the forefront of building green in Vietnam.

Originating from California, US, VGBC was established in 2007 and, as a Green City Fund, Inc. program, the nonprofit covers a wide range of categories when it comes to building green in this country. VGBC encompasses infrastructure, development and manufacturing, consumer behavior and even transportation. What lies at its core is raising awareness and advocacy, their Green Building Certification system (also known as LOTUS), along with research and education. Similar to the US Green Building Council’s LEED (Leadership in Energy & Environmental Design) certification program, LOTUS stems from VGBC and applies exclusively to buildings in Vietnam. 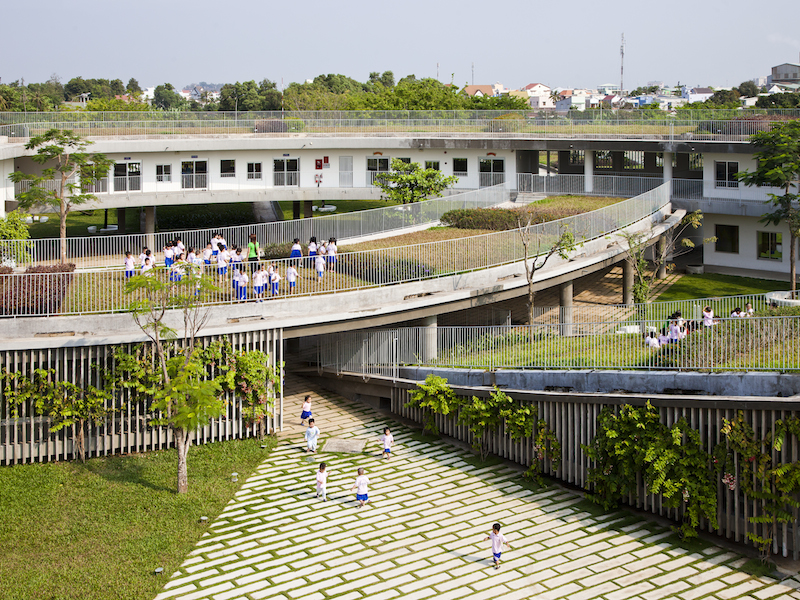 As the Southern Regional Coordinator and Chairman of VGBC, Melissa Merryweather was brought on during the early stages in 2008 and is a major editor of the LOTUS certification system. She has been a key participant on many green projects in Ho Chi Minh City.

“The fact is, if you really start out to design something in a truly sustainable way, you will enhance your own brand quite subtly from the bottom up. And when you give yourself the tools to improve it as well,” says Melissa.

VGBC’s LOTUS rating system ensures building projects throughout Vietnam are constructed with the highest degree of environmental responsibility throughout their life cycle and with the lowest amount of impact. As Vietnam is the fifth most vulnerable country in the world to climate change, LOTUS includes adaptation mitigation, making it the first certification system to do so. 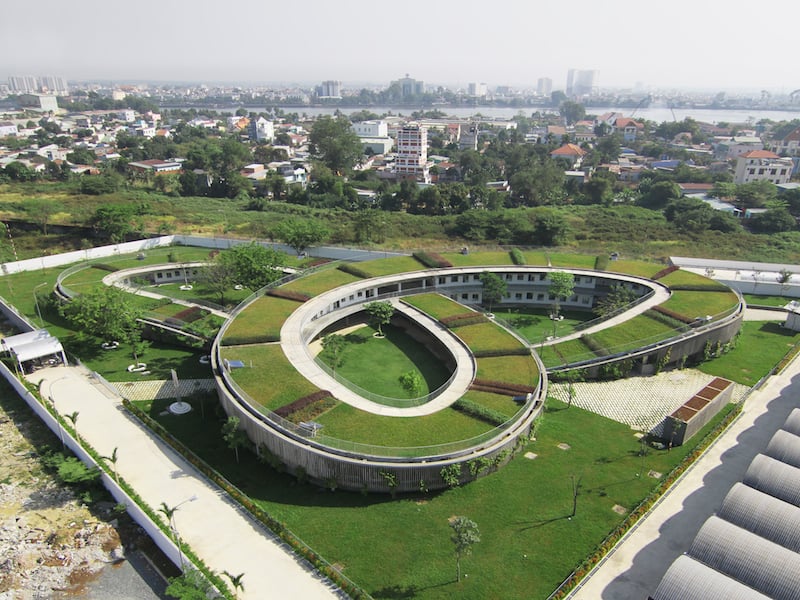 “So you’re going to design it right and you’re going to construct it right – LOTUS is unique in that it requires the construction to match your design or better.” She explains that most certification systems are flawed, whereas LOTUS prevents companies from cheating the system. “The other thing VGBC is working on is putting out a LOTUS certification system for single family homes which would be amazing because there is no other competitor in the region except in Singapore.”

Over the past decade the city is gradually becoming greener, but there is still a long way to go and many obstacles to overcome. “There’s been a massive building increase. Vietnam is behind China and perhaps India and Indonesia. It’s one of the fastest construction booms in the world. The numbers are boggling,” says Melissa.

According to BCI Asia and global commercial real estate firm CBRE Group Inc., the number of projects currently under construction, including offices, retail, hospitality and residential, totals 381. As far as future projects go, from 2015 to 2030, that figure jumps to an estimated 582. With the help of VGBC, major projects have been implemented around town and companies are becoming more educated and aware of the sustainable options available. 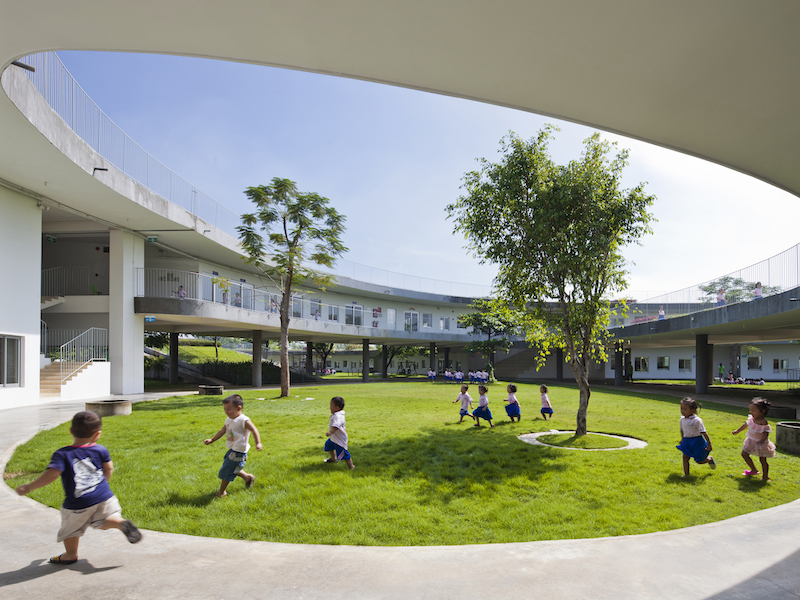 “We’ve been in a really happy situation showing that in Vietnam you really can build very sustainably with no extra cost or very small extra cost that really has good payback,” adds Melissa. “I’ve seen the benefits for the managers and for the occupants. I’ve seen manufacturers get their work force really interested in all of these issues and educate them so then they go home and they practice this stuff as well.”

Some examples of VGBC LOTUS certified projects includes the Pou Chen Kindergarten (pictured above) located next to a shoe factory in Dong Nai Province. Designed and constructed by Vo Trong Nghia Architects in 2013, this “Farming Kindergarten” accommodates the factory workers’ 500 children.

“The client proposed a suitable building for sustainable education for the employees’ children. So we built the building as one continuous structure to show the fluidity of the idea of sustainability and to provide a place with lots of landscape for the children to run around and to be more active,” explains Takashi Niwa, a Partner at Vo Trong Nghia Architects.

Using natural and local materials, the building incorporates a vegetable garden roof, a water recycling system, solar water heating and more, earning it a Silver Level LOTUS certification. “Our target is to bring back more green to the city not only to improve the energy efficiency but also to improve the happiness for living,” he adds. “It’s good motivation to become a greener city. I think in a few more years we will be seeing a lot more green buildings.” Pou Chen kindergarten is just one of many green structures Vo Trung Nghia’s team has worked on throughout Vietnam.

“Right now we’re seeing a couple of really exciting projects. We’re working on one factory for a garment producer and they’re going for Platinum LEED and Platinum LOTUS green certification at the same time,” says Melissa. “So far, it looks like they’re saving something like 45 percent of their energy and they’re considering going off the grid. It is a very cool project and I think we’re starting to see some people really try to reach a very high bar now for the first time.”

Take for example the Big C Di An hypermarket in the Green Square commercial center in Binh Duong Province which actually achieved both LOTUS and LEED certification. Saving 30 percent of energy consumption, this is the first project with a solar battery system in Vietnam, according to The Saigon Times.

In addition, there are a number of factories outside HCMC that are LEED or LEED and LOTUS certified. As far as direct changes go in the city, head over to President Place (93 Nguyen Du, D1) located in the heart of Saigon, which was the first building in Vietnam to reach LEED Gold certification in 2012. With its use of locally-sourced sustainable construction materials, a rooftop garden, efficient air, lighting and water systems, President Place has not only minimized its effect on the environment but also operating costs for the tenants.

“What I like to say about green building is that it’s very difficult to apply green building later. You could always improve things but if you start your project from the concept stage onward, then you can integrate very easily and it actually doesn’t cost anything extra,” Melissa continues.

One major change in the city’s infrastructure is the canals. One of Saigon’s largest canals – Tan Hoa-Lo Gom – was so polluted with sewage it became a health issue to neighboring residents, affecting nearly 1.2 million people, according to Vietnam.net. What originally began in 2010, the World Bank funded this USD167 million project to improve the canals. Since the project began, 13 bridges have been built; landscaping has been upgraded along with added mitigation flooding and wastewater collection. A more recent canal development totaling USD450 million will focus on the Nhieu Loc-Thi Nghe Canal and another USDD100 million to fund the restoration of the Hang Bang Canal, originally recognized as the Canal Bonard.

In addition to their LOTUS certification, VGBC focuses on local awareness by educating young architects, engineers, building owners, local government and businesses providing anything and everything one needs to know about being green. From certification systems to free lectures at universities and schools to offering their own education program and workshops for individuals and organizations, VGBC strives to raise awareness throughout the country.

“In this country there has been a lot of talk saying ‘sustainable buildings are so expensive’ and that’s utter nonsense. People who’ve said that don’t really know much about sustainable construction,” says Melissa. A unique resource VGBC offers is their free online Vietnam Green Database, providing information on options to living green such as sustainable cooling systems and alternatives to using bricks for building.

In addition to VGBC, there are green social clubs and groups in Saigon for people to get involved in, for example the Green Drinks social club. Originating from London in 1989, Green Drinks was organized with the intention of bringing environmentally conscious individuals together to discuss, network and bond on all things green. Spreading all over the world, Green Drinks (Facebook: Green Drinks Saigon Lounge) found its way to Saigon in 2009 as the 455th club to open and the first in Vietnam.

“We’re really trying to showcase information that is factual and substantial. It’s the substantial end of the sustainability market,” says Melissa, who is also a co-organizer of Green Drinks since its inception.

Meeting on the first Thursday of each month at Zest Bistro
Café, Green Drinks organizers bring in speakers to discuss topics from alternative energy and sustainable coffee to green building certification systems and fundraising, recycling and more. “What we’d really like to do now is to have it reach out to more of a professional network, so people who are interested in green subjects but also professionals who are involved in sustainability. So they can know what else is going on and who else is operating in the sector.”

Their next meeting will be on May 7 and will feature Gavin Smith, Director of Clean Development Fund at Dragon Capital, and the topic is Hydropower: The Good, The Bad and The Ugly.

“The Vietnamese are looking forward, children are getting an education, and family well-being is really important. So I think sustainability could actually play a major role in the next phase of Vietnam’s development and I think it really has to,” says Melissa. “It’s exciting to see groups like VGBC starting to make an impact.