Mr. Le Cuong was the Co-Founder and Vice-President of both The Vietnam Green Building Council and The Green Cities Foundation (Oakland, USA). He was awarded honorary member of the French Association of Architects in 2008 with strong training, urban development and heritage preservation background. From 2007 – 2008, he was professor at the University of Hanoi, School of Architecture. He received his Master Degree of Architecture at Cities Design from MIT, Cambridge, USA in 1971 and Federal Polytechnic School of the University of Lausanne, Switzerland in 1967. “I formed Green Cities Fund as a California “public benefit” corporation in 2005 to continue the humanitarian work Nhu and I had been doing in Cuba, Afghanistan and elsewhere.  In Vietnam our friend Le Cuong helped us start the Vietnam Green Building Council as a Green Cities Fund project, but the person who really devoted tremendous time and effort to make it successful and a functioning organization was Jalel, so he deserves much of the credit for its success.  I’m thankful to have played a small role as a catalyst to VGBC’s success and survival, and look forward it its increasing assistance to Vietnam becoming a greener economy.” 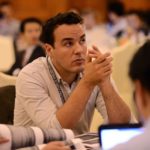 Dr. Jalel Sager teaches ecological economics and microgrids at the Energy and Resources Group (ERG) at UC-Berkeley.  He researches Mekong energy planning and development for a joint Berkeley-Harvard University project (LMPPI); his previous work focuses on historical and institutional relationships between energy and polit­i­cal economic systems.  In 2012 Dr. Sager co-founded the Southeast Asia—Renewable and Adaptive Energy (SEA-RAE) net­work at Berke­ley for microgrid research and implementation, and in 2014 New Sun Road, an allied California benefit company.  In 2007 he organized the Viet­nam Green Build­ing Coun­cil (VGBC), now the nation’s lead­ing green build­ing orga­ni­za­tion, serv­ing as its founding exec­u­tive direc­tor until 2009, when Futu­rArc mag­a­zine profiled him as one of Asia’s top 20 pos­i­tive influences in the build­ing sec­tor.  Dr. Sager received his PhD from ERG in 2015, an ERG Mas­ters’ degree in 2011 and an undergraduate degree from New York University’s Gal­latin School.  He has received the US National Sci­ence Foundation’s Grad­u­ate Research Fel­low­ship; a US For­eign Lan­guage and Area Stud­ies fel­low­ship; and a National Merit scholarship.